We headed to Los Angeles for 7 days. The main goal was for the Hunger Games cast but Paley fest was also happening at that time. 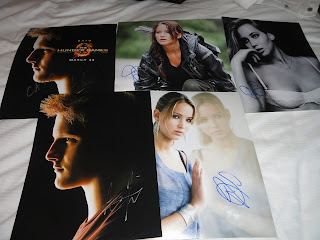 We landed in Los Angeles and knew that Jennifer Lawrence was flying out to Miami within the hour so we basically RAN to the next terminal and withing 20minutes of being in Los Angeles, got Alexander Ludwig. Alex remembered us from back at Thanksgiving when he flew into Vancouver to visit his family. He's such a cool guy and signs everything.

Next up was Jennifer Lawrence.What an amazing girl. The best part of this was that her publicist had gone inside to wait for her, so there was no one to say "One per" or, "No more". Jennifer signed EVERYTHING. And I mean everything. We probably got at least 15 autographs from her and at first, they were her nice autograph but as it went on they got messier and messier and we backed out while she was still signing because when her sig gets messy, it just doesn't look good. She was a total sweetheart and posed for pictures with everyone waiting. 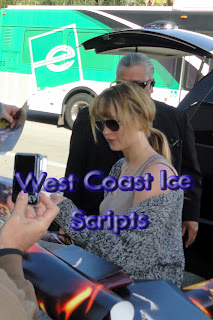