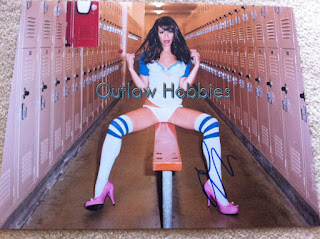 Yesterday Lea Michele flew in from London to visit her boyfriend Cory Monteith.

We got a tip that Lea and Cory were out for dinner at the Eatery in Kitsilano and headed out there. As they were leaving the restaurant, Cory offered to sign and saw the photos were all for Lea and joked "I sign so many of these things you guys probably don't want me any more." He pulled Lea over to sign and she started saying "It's raining, it's raining!" (we were under an awning and it was  completely dry). She signed a few and then pulled Cory away and briskly walked to the car. We managed to get 2 each. 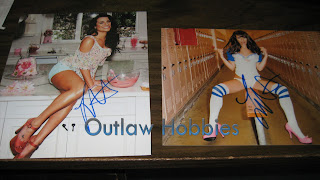 At their hotel later in the evening as they were walking (very cute, holding hands and snuggling), Cory walked right over to me and offered to sign and looked and said "oh, Lea!" and he called her over. She was in no mood to sign but Cory said "C'mon babe, they're good people" and Lea came over, signed one. When asked to sign another she said "I'm tired." Cory looked at her and made a gesture for her to sign more and instead she walked away back inside. Cory apologized to me and wished me a good evening.

Cory Monteith is one of the nicest guys and always very cool to fans. It's very strange to see them as a couple as she seems very not fan friendly but, they are adorable together. 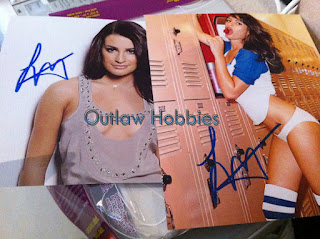 Overall though, we got a bunch of Lea autographs. Wished we had our Cory photos on us to get done but, maybe next time. *I guess I should add, Cory knows us well and makes sure to greet us everytime he sees us. He is also very well aware of what we do. He is super cool everytime.*

I don't know where all of you are getting this impression we "followed them around." We were told where Cory was eating and Cory always stays at the same place so we headed back there later on.