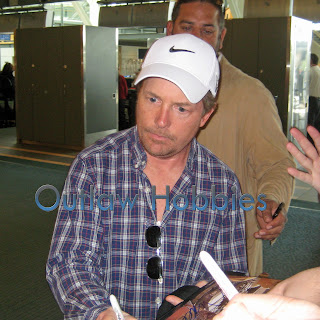 How is it we've lived in Vancouver all our lives and yet never met Michael J Fox? Well, now we can say we have, and he's earned himself a spot at the top of the best signers list.
We first got Michael at the airport after he flew in from New York. He signed for everyone waiting and was very patient about it. 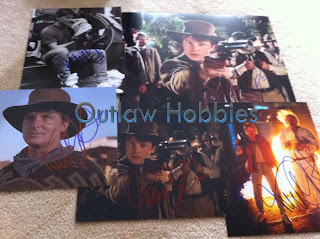 Later on he was being honored at an event and he signed on the way in for the few people waiting outside. On leaving (remember - this is the 3rd time that day that he had seen the same group of people), his security guard kept saying "he's not signing anymore!" and Michael looked over and saw everyone, said to his security "No, I have to sign for these guys." He came over and said "I'm sorry that I'm really tired guys, is it alright if I just do 2 each for you?" He signed for everyone and talked and joked the whole time about how he has a golf tournament tomorrow and of course, it's Vancouver, so it will probably be raining.


What a stand up guy. I think we may have to donate a percentage of our sale of his items to Stem Cell research. Honestly, one of the most genuine, kind men. These local boys sure are winning us over this week.