Colin O'Donoghue and his crutch

Colin has been less seen on set as of late due to his injury so when we got his flight coming into LAX, we went out for him. Colin is just like the rest of the OUAT cast - super cool. 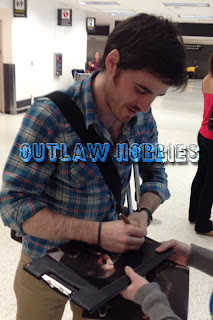 He stood and chatted about the injury and how he's almost healed up and will be back on the Steveston set this week. He said this whole "popularity" and "fandom" thing was new to him but he couldn't wait to experience first hand.

At the Paleyfest panel, Colin was so nice that he even walked the 100m over to the people on the side and signed for them (minus the crutch) and during the panel stood around and met with all the fans trying to see him. At one point there were about a dozen girls crying because Colin had touched their hands and signed their programs. Watch out ladies, he's a heartbreaker!