We flew into Los Angeles Friday afternoon and knew that Nicholas Hoult had an appearance the night before and would probably head back to England that day. We got lucky and his flight was early enough that we would still make it to the Walking Dead panel.

Nicholas has always been very cool and this time was no different. He signed a bunch of photos and posed for pictures with and thanked us for supporting his films. 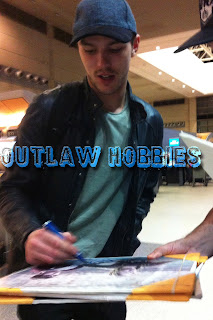